It’s this time of the year again: On 16th Octobre World Bread Day is celebrated. Since 16 years now Zorra of 1 x umrühren aka Kochtopf has been organizing this culinary holiday.

I haven’t taken part too often because somehow baking bread is a bit of a horrifying task for me.

However challenges are there to be accepted:

That’s why a baked a simple no-knead bread accordig to a recipe by Marcel Paa (German only). There’s a tutorial on YouTube which can be very helpful to watch, even if it’s only in German, too.

The dough needs at least 12 hours of fermentation, very little yeast and three times of stretching and folding.

Sieve flours into a bowl.

Seperate water to two bowls and dissolve salt in one half and yeast in the other one.

Then add the dissolved salt and the yeast with the water to the flour and make sure that everything is used.

Mix all ingredients without producing any lumps.

Place dough in a lightly greased dough basin, cover with a cloth and let ferment at room temperature for at least 12 hours.

Stretch and fold dough two to three times in the meantime:

Grab the dough on one side, lift it and fold it to the opposite side. Repeat at all four sides. Cover the dough again and let sit for the rest of the time.

After the fermentation period, pour the dough onto a lightly floured work surface and then grind 2 – 3 times over the work surface to get a smooth surface.

Then turn dough into a slightly elongated form on an unfloured work surface: To do this, pull the dough slightly backwards, fold in slightly left and right and then press slightly flat.

Turn the dough over (closure side is now at the top), flour lightly and press the closure slightly open with the edge of the hand.

Put dough into the prepared proofing basket with closure at the bottom.

Let the dough piece rest for about 40 minutes at room temperature.

As temperature was only 18 °C in the kitchen overnight, I put the dough in the Brød & Taylor fermentation box at 30 °C as a precaution. I also let it rest 10 minutes longer then the 40 minutes as stated in the recipe.

Meanwhile preheat oven to 250 °C top heat and bottom heat, placing a baking stone or an empty baking sheet together with an ovenproof bowl into the lower part of the oven.

Put the dough piece onto a floured bread scoop (closure is now on top) and then directly onto the hot bread baking stone or the hot tray in the oven.

I put the dough on a fitting piece of baking paper on the the scoop and put it onto the baking stone with the paper.

Push an empty baking sheet upside down into the top groove of the oven and pour about 100 – 200 ml of water into the bowl.

Close the oven door immediately and bake the bread for 20 minutes.

After 20 minutes remove top sheet and bowl from the oven, deduce temperature to 210 °C and bake for another 30 minutes until it is golden brown.

Let cool down the bread on a grate.

The bread looked fantastic on the outside although it became a bit wide.

After it had cooled completely I cut it and what can I say?

It’s a BREAD and a fantastic and delicious one, too! 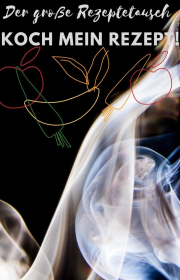